Stately Residence of Nana Phadnavis and the “Book Village” – Bhilar

Around 50 miles south of Pune, India, in the town of Menavli, Nana Phadnavis, an influential statesman and minister of the Maratha empire in the mid seventeen hundreds, built a wada (residence) on the banks of river Krishna, which served as his primary residence.

This summer, with temperatures consistently above 110F (40C), we were looking for places to visit which would have a hint of coolness. En-route, Rutu-Farms, a resort near the town of Wai, we made a pit stop at the famous temple of Lord Ganesh. While speaking with the locals, we realized we were close to river Krishna, and in the vicinity of the famous stately residence of Nana Phadnavis.  We decided to drive there.

Situated on the banks of river Krishna, this residence features a ghat and two temples, dedicated to Lord Vishnu and Lord Krishna. The Peshwa-era architectures usually saw such combinations of a Wada-type residences, a Ghat on a water-body and a Temple. There was a big open courtyard as we entered. On one side of the courtyard were all the rooms whereas the opposite side had tall walls and stone towers for security. The staircase from behind the rooms descended to the ghats of the river. So basically it was a mansion with private access to the riverfront.

Backyard of Wada of Nana Phadnavis

All the documents from that era were written in a script called Modi (nothing to do with the PM of India). In this century, there are only a handful of people who know how to read and translate Modi into local languages. There is a huge demand for these people as without their help, all the ancient literature will be lost with time. These folks do a very important job of translating and preserving this literature and hence preserving our history. Looking at the placards displayed in the wada, this town may be lucky to have one such person.

We spent some peaceful time at the temple of Lord Shiva. The temple has an inner sanctum one could descend into, which is carved out of stone, is pitch dark and cooler inside. The intention is to numb your senses as you enter a state of meditation while praying to Shiva. The Nandi bull, considered as a gatekeeper of the abode of Shiva, is seen facing the entrance. Nandi is considered as a chief guru of the eight disciples of Lord Shiva, who were sent in eight different directions to spread wisdom. Right in front of Nandi, is the tortoise. It is believed that just as the tortoise cocoons itself in a shell when touched, it is expected from people who enter the inner sanctum to enter a meditative shell while praying. We tried — its hard!

The gatekeeper Nandi and the Tortoise facing the inner sanctum

The bell house of the Meneshwar temple houses a six-hundred-and-fifty-kilogram bell. This bell was captured by Bajirao I’s brother Chimaji Appa from a cathedral in the Portuguese fort at Bassein. The bell has a crack and reminded me of the liberty bell in the US. 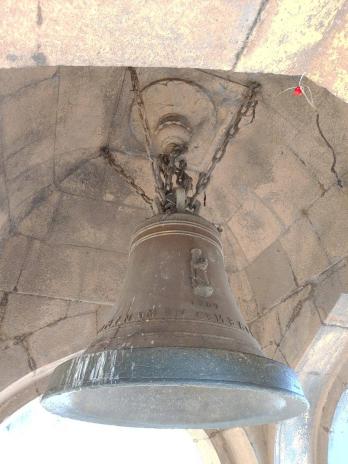 The entire tour is free of cost. Although I felt it would be worth to charge the tourists and the earnings could be used for restoration and promotion of this place of such historical significance.

On our way back, we stopped at an interesting place. Situated in the hills, the village of Bhilar is declared by Government of India as the “Pustakanch Gaav” or “Village of Books”. With digital economy booming, people are moving from blogs to vlogs, from editorials to insta-stories and retention time is reducing. The pleasure in reading books is dwindling and hence the intention of this initiative is to rekindle the fun in reading. The residents of this village have opened up their houses to literally anyone who wants to come in and read books. Each house featured a genre ranging from fiction, non-fiction, biographies to history and poetry. It’s amazing how these folks do not worry about thefts. There are no locks, doors are always open and the entire house is accessible to visitors.

We were offered water/ juice as we entered houses, there were seating arrangements for us to be comfortable and the hosts gave a quick background of all the books  that were available. It was 2 pm in the afternoon, the sun was blazing hot. We entered one house to see the host taking a nap. We quietly turned around to leave so as to not disturb him. His wife saw us and urged us to come in. The husband woke up and with a pleasant smile on his face, offered us a drink. We were feeling very guilty to have disturbed their nap time, but it looked like no such thought even crossed their mind once.

Such welcoming families are rare to see these days, here there was an entire village which welcomed us with open arms.

About the Author: Tejas Chafekar

This site uses Akismet to reduce spam. Learn how your comment data is processed.